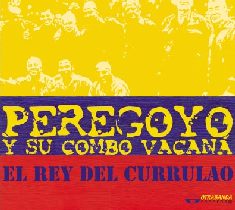 For the first time in more than thirty years, Peregoyo y su Combo Vacaná have returned to the international arena with a new recording and with the same musical force that made them famous. The new record is a testament to the musical prowess of this giant of Colombian rhythms with a seminal influence on the history of its music.

Thirty years later, on “El rey del currulao” this renowned Colombian orchestra carry on like a band of exuberant young dogs. Their mix of African rhythm with sharp Latin touch still remains irresistible. Driving dance music characterized by a buoyant simplicity sprinkled with rippling sax solos… At the same time this comeback album illustrates the mix of styles that a creolized country like Colombia yields. Yet Peregoyo refers to the currulao-style as ‘the mother of all local rhythms¹. Peregoyo has even managed to transform the Duke Ellington standard ‘Caravan’ into a spine-tingling Latin hit. This is an unrelenting dance album that can play on all summer long. – Trouw